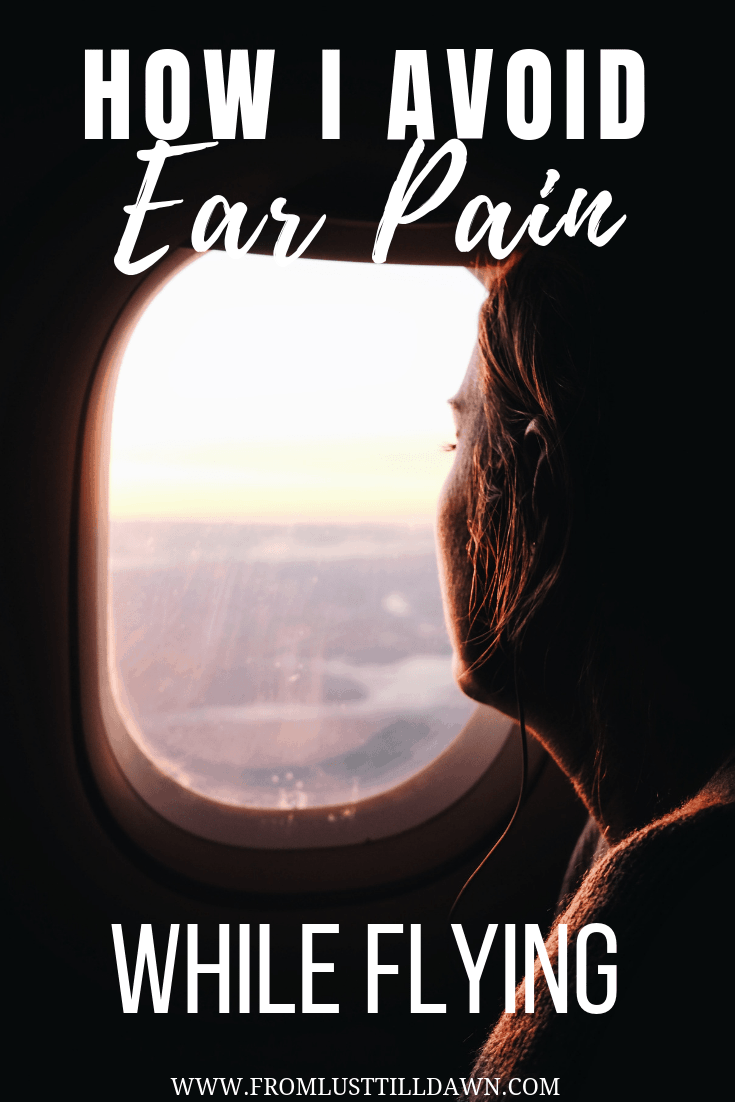 Before I knew how to avoid ear pain during a flight, I used to get sharp, shooting pains from my nose to my ear to the top of my head when the plane descended. Mike got it too.

We’d tuck our head into our laps, cowering from the airplane ear pain. It was pretty unbearable but considering it only happened when we flew, we didn’t do much about it.

That is, until a flight attendant told Mike how to avoid this ear pain during a flight.

Since then, I’ve uncovered my own ways of avoiding ear pain while flying, especially while flying congested!

Too lazy to read the whole article? The best way to relieve ear pressure from flying is with this product I recommend. It’s the #1 way I avoid ear pain while flying.

Clearing Up Your Sinuses to Avoid Ear Pain During Flight

The tip that the flight attendant gave to Mike about relieving airplane ear pain was by far the best tip we’ve gotten about this. She recommended us using a sinus spray to clear up our sinuses before we flew. This changed up everything!

Now, we never fly without a sinus pray. We always use one that has a pump to make it easier to inhale, is moisturizing since planes are so dry, and lasts for 12 hours so we don’t have to use it twice for ascent and descent.

Get the exact sinus spray we use on Amazon.

Here’s the science behind why a sinus spray helps airplane ear pain:

“During a flight, the air pressure in the sinuses (collections of air within the facial bones) and middle ear must equilibrate with the cabin pressure inside the airplane, which changes during ascent and descent. Certain infections and other conditions can cause blockage in the Eustachian tube (which connects the middle ear to the back of the nose and maintains equal air pressure on both sides of the eardrum) or in the sinus openings, and this restriction to the flow of air can prevent the equalization, or equilibration, of pressure and result in pain.” – Medicinenet.com

Even if you don’t have an infection or sickness, a sinus spray will make sure that your nasal passageways are completely clear, allowing them to equilibrate with the cabin pressure, and VOILA– no airplane ear pain!

Air pressure regulating ear plugs are great at slowing down the equilibration process that happens during ascent and descent. The slowing down of the air pressure changes should reduce the airplane ear pain you experience.

Chewing Gum or Hi-Chew During Ascent and Descent

Now this technique doesn’t help as much as using the sinus spray or ear plugs, but chewing gum, or better yet, Hi-Chew (so you don’t have that sticky mess after) helps because the chewing motion helps open up the eustachian tubes.

Hi-Chew is part of my ultimate European packing list!

Recently, I flew three times with a cold. I was worried that my ears would erupt (or something improbable of happening), but all in all, I did pretty well despite flying while congested. Here are the steps to take for flying with congestion:

Hope this helps you tremendously with your ear pain during a flight. If it does, make sure to let me know on Instagram. DM me!

? Pin or bookmark this for later!

92shares
Lust ‘Till Dawn is a participant in the Amazon Services LLC Associates Program. As an Amazon Associate, we earn from qualifying purchases. Learn more.

👟 Kicking off March with some big news tomorrow

When that quarantine boredom hits... • btw in th

Save this for when the internet gives you anxiety

TW ⚠️ GRAPHIC STORIES: I have some graphics st

What’s a new norm for you or even for your city?