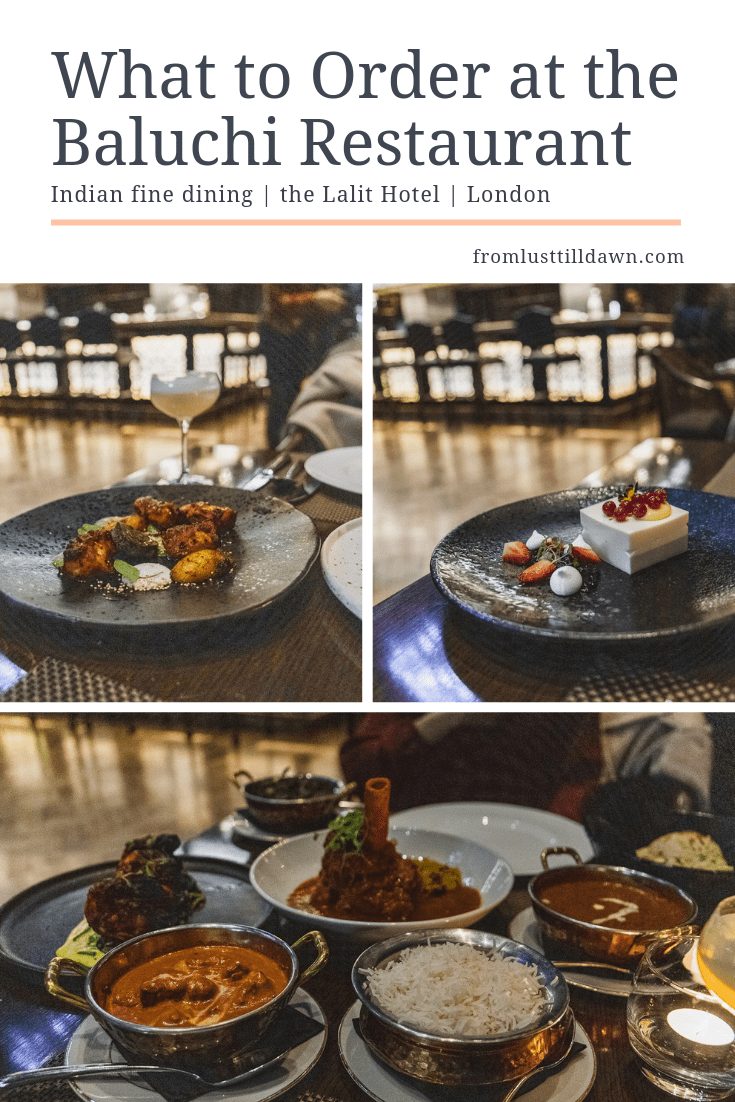 London is widely known for its Indian food, and as a result, over my three trips to London, I’ve seeked out Indian food from a market, a sort-of fast casual place, a trendy hot spot, and an authentic restaurant. I had to round out this “world tour” of London’s Indian food at the fine dining establishment, Baluchi, located at the Lalit Hotel.

Thanks to the generosity of the Baluchi restaurant management, I was able to try an assortment of dishes and truly experience what the best ones were to order.

Price & Service at the Baluchi Restaurant in London

Before I jump into what to order at the Lalit Hotel’s Baluchi restaurant, I need to talk about the service. IT’S PHENOMENAL!

The staff is quite friendly and attentive without being overbearing, and they’re willing to help you out with your indecisive personality when it comes to choosing food. They don’t only offer dishes based on their own palate but thoughtfully ask you what you’re in the mood for and go based off your own personal tastes.

Of course, they also let you know what the most popular dishes are so with that in combination to the personalized suggestions, they actually help you narrow down the menu to your taste.

Furthermore, for a listing with four £ symbols on Google, I thought the Baluchi restaurant was going to be outrageously expensive when it fact for the service, quality and taste of the food, the price was very reasonable.

Main dishes varied from £16 to £30 while appetizers and sides ranged from £3 to £17. See?! Quite reasonable. See the à la carte menu on their site under the menu tab.

What to Order at the Baluchi Restaurant in London

We ordered a ton of food at the Baluchi restaurant and out of everything we ordered, my absolute favorite dishes were the grilled prawns, palak paneer (spinach, garlic and paneer dish) and dal baluchi (black lentils in creamy sauce).

For meat lovers, I’d highly recommend the lamb shank because of its fall-off-the-bone tenderness, and for those with a milder palate but still wanting meat, I’d opt for the butter chicken, one of the restaurant’s most popular dishes.

For dessert, the server recommended the Bhapa Doi (honey steamed yogurt with fruits and gulab jamin) as something traditional, and we chose Saffron Infused Compressed Tandoor Pineapple– WOW! Both were STUNNING… if that’s a word to describe food.

Both the desserts had a hint of savory Indian spices making them so unique but still so delicious.

If I were to go back, I wouldn’t order the same appetizers, which were the Tandoori Octopus and Wood Pigeon.

The Tandoor Octopus was quite tender and flavorful, but it didn’t wow me so if I went back, I’d want to try something else. If you LOVE octopus, this might be one to put on your list of appetizers to try there.

As for the Wood Pigeon, I ordered this because I’ve only had pigeon twice in my life before and don’t think this is the place to try it.

Overall, I’d recommend going to the Baluchi restaurant at the Lalit Hotel in London to try Indian food in a fine dining establishment. You’ll surely enjoy the service, quality, and taste of the food combined.

Check out other delicious places to eat in Soho, London here.

? Pin or bookmark this for later!