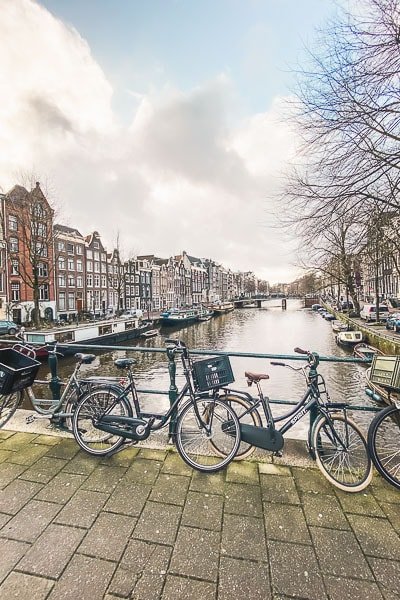 Wondering where to get second hand bikes in Amsterdam? How about what to watch out for? Get the know-how here.

There are a ton of options for buying second hand bikes in Amsterdam but there are a few things you absolutely need to know such as avoiding getting previously stolen bikes (it happens) or simply just knowing where to get them.

Buying a used bike in the 1000+ second hand shops in Amsterdam can be more expensive than you’d like.

If you need to be extra budget savvy, you can buy cheap bikes in Amsterdam online.

There are several places online that you can get a second hand bike in Amsterdam.

If you are a tourist buying a bike in Amsterdam for the week because it’s cheaper than renting one, resell it or give it to someone (like me?). DO NOT ditch your bike around the city. We have enough bikes taking up the city’s space.

Pro Tip: Surprisingly, bike locks should be about 30-50% of the cost of your bike because bike theft is so common here. Get a solid back lock and chain.

There are various Facebook groups where people sell second hand bikes in Amsterdam.

People tend to jump on great deals for cheap bikes so keep your notifications on for every post!

HOW TO AVOID BUYING STOLEN BIKES

When you buy a second hand bike online, there is a risk that it was stolen. Since bike theft is a common issue in Amsterdam, it’s always a good idea to be aware of what you’re buying.

If you are caught riding a stolen bike, you can be arrested for possession of stolen goods even though you didn’t steal it yourself!

There is a maximum penalty of six months imprisonment or at the least a €400 fine.

To be real, no one is going to pull you over and check if your bike is stolen, but it’s always better to be safe than sorry.

One way to check if your bike has been stolen is to check the bike frame number. The number can be found under the bike, or around the seat, or around the front handle bars or by the peddle.

Input this number into the national stolen bike registry before you pay for the bike.

If you’re living in Amsterdam and your bike is stolen, you can also register it stolen in the registry!

GETTING A USED BICYCLE AT A SECOND HAND SHOP IN AMSTERDAM

If you’re buying a used bicycle in Amsterdam at a store, don’t just pop into the first shop you see to buy a bike.

Go online, look up bike shops, and check to see if they have any reviews.

This is important because buying a used bike from a store vs. online means that you’ll be paying a premium. This premium includes:

You’ll want to find a bike shop that has good reviews stating that they fixed the bike up nicely and that they included a standard three month warranty for the bike that they actually honor.

Bikes from rental shops are great because if it’s a good rental shops such as Rent a Bike, you know the bike has been continually maintained throughout its life.

I also recommend Otto Bikes on Overtoom where Mike, my husband, got his third (one was stolen and another broke down beyond repair; third time’s a charm).

You can also buy second hand bikes at markets in Amsterdam. They won’t always have better choices or prices than used bicycle stores, but still worth checking out. Here are a couple:

BEST LOCKS FOR YOUR USED BIKE

Once you buy your “new” bike, make sure to get two heavy-duty chain locks for it or a chain lock and a back lock.

If you have a cheap bike in Amsterdam, buying an expensive lock might seem counterintuitive, but locks are worth the investment here since bike theft is common.

Note: Even though these are great locks, they do not guarantee your bikes from not being stolen.

Demonstration of Two Bike Locks on a Used Bike

This is very convenient to have when you are running into a store to buy something, but don’t need to lock your bike up fully.

There’s also a chain lock for your frame.

I hope this helps you get familiar with the second hand bike market in Amsterdam.

Comment below where you end up getting a used bike from or if you have any tips that others can use for buying their bike!

Follow @imadamexpat on TikTok, ask @sarchetrit on Instagram, or read related this guide to living in Amsterdam

Hello! For buying bikes online in Netherland, i recommend marketplace for bikes: bikefair.org :)

Thanks you very much and Keep up the good work.

Great tips for buying used bicycle...I like Your article because it gives me very useful,helpful and great information about used bicycles. Thanks for sharing.

Hey Sarah I like your article very much. Amsterdam bike one of the best bikes for me. I personally like it very much.