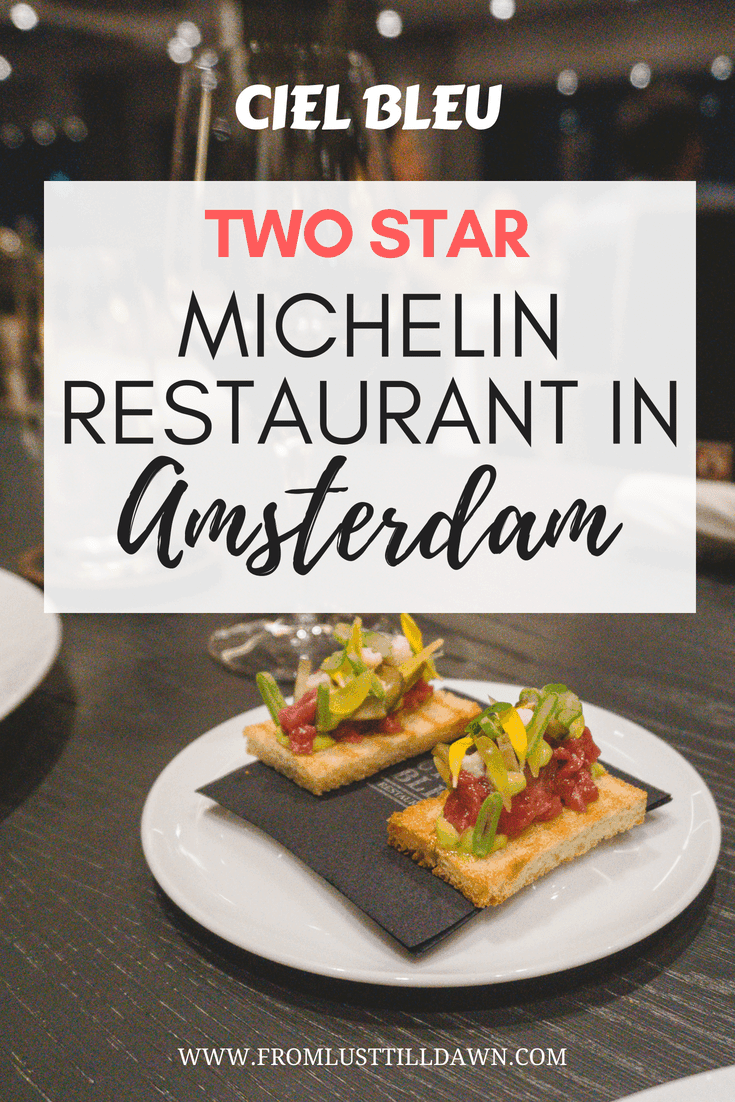 Mike and I have been married for three years— woo hoo– and in the true fashion of Sarah style celebrations, I had to splurge on food. The last two years, we went to Lyon, France (to eat) and then to Santorini and Crete, Greece (to eat) so I wanted to keep up the indulgent celebrations I’ve become accustomed to. Call me spoiled. However, Mike couldn’t travel with his work schedule so we decided to celebrate our anniversary at a two star Michelin restaurant in Amsterdam.

If you’re looking for an extravagant Michelin restaurant in Amsterdam, then read on to see if Ciel Bleu is the place for you.

Photos of What We Ate at Ciel Bleu

Eating at Ciel Bleu was like a food marathon. There were so many courses, all beautifully presented and prepped. Here’s a snapshot of what we ate. 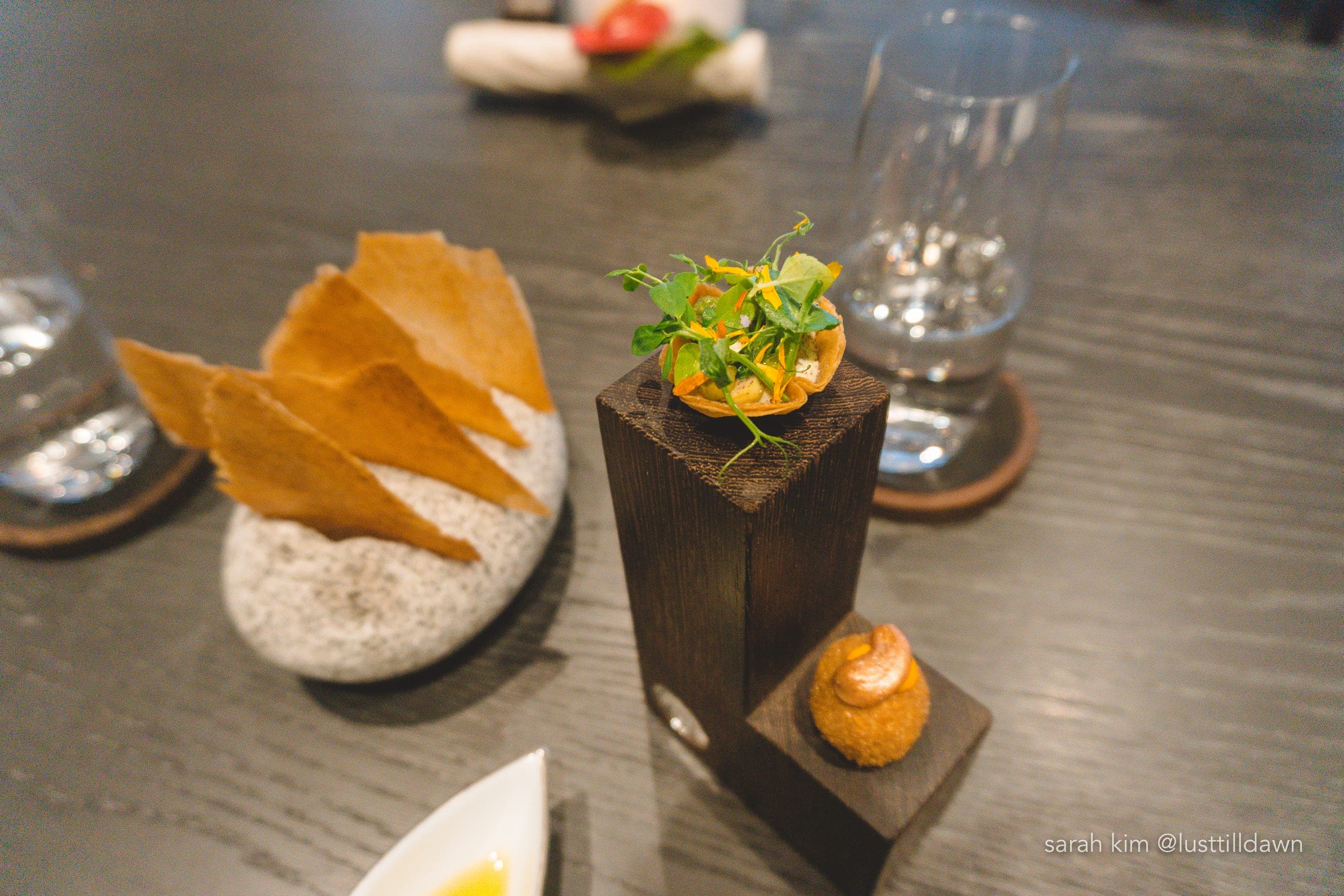 The amuse bouche consisted of four small bites inspired by the world:

There were five different butters to choose from for your bread. Between Mike and me, we got the yuzu, onion, herb, and regular butter. If you didn’t know, I LOVE BUTTER so despite not being a course, this really excited me. 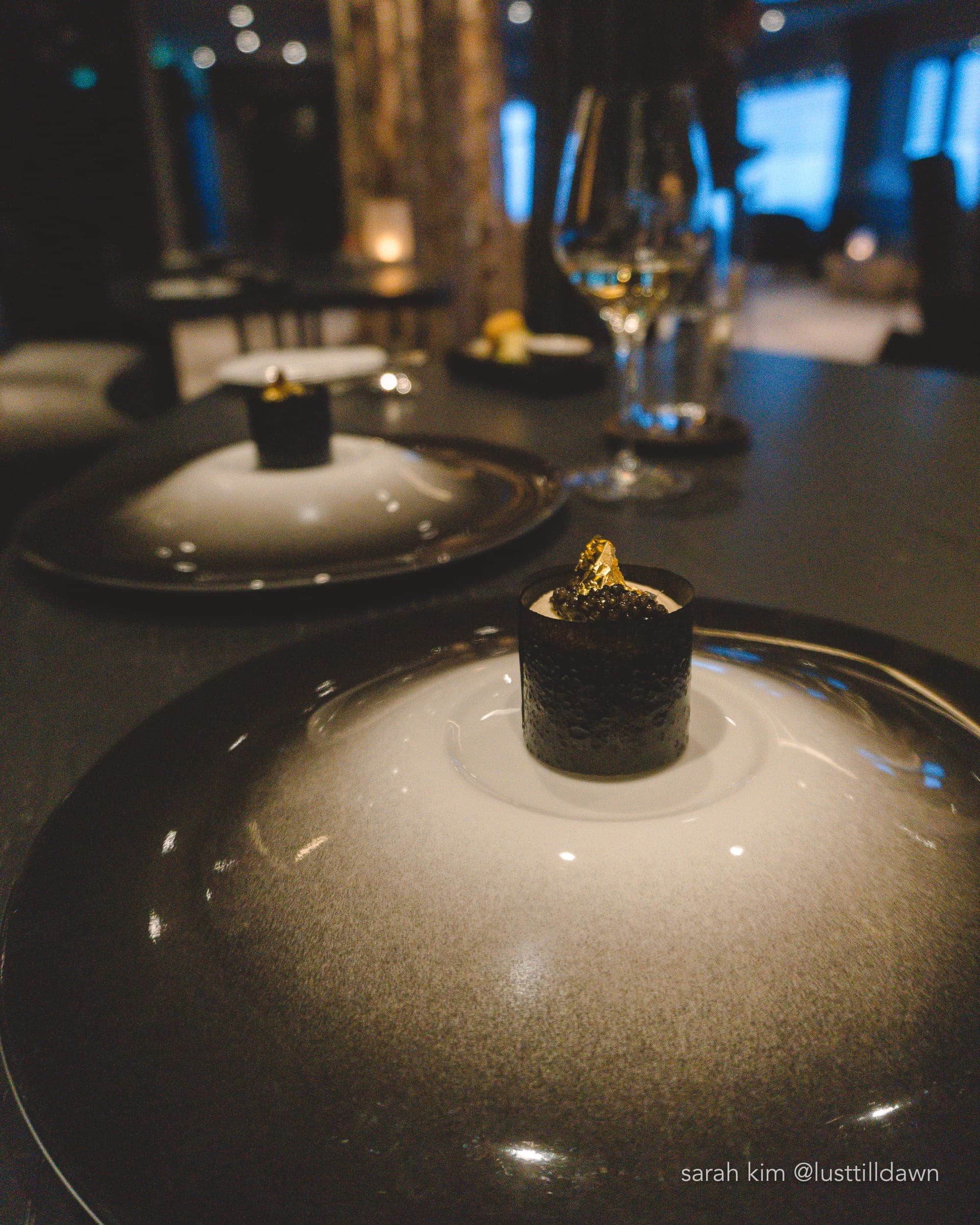 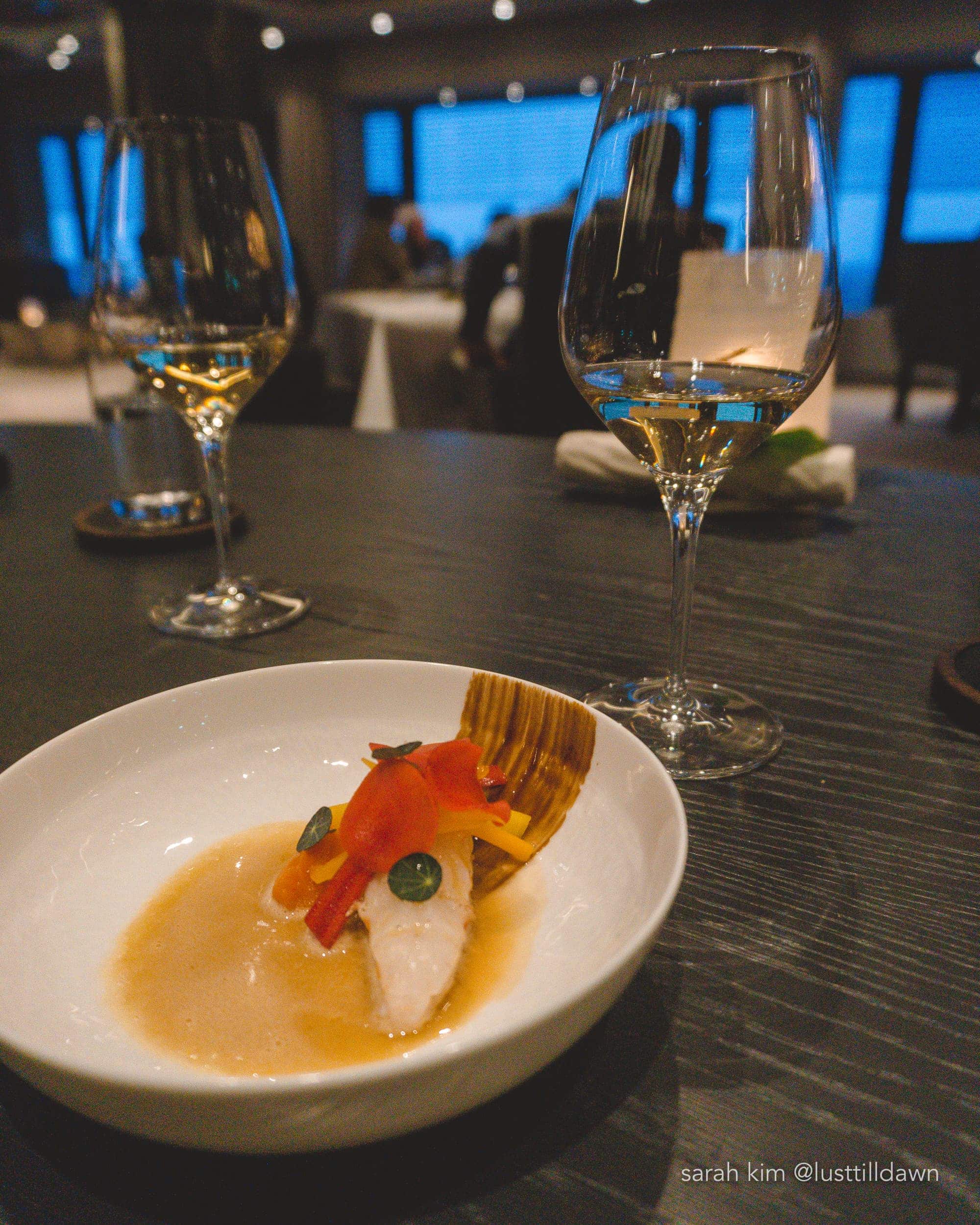 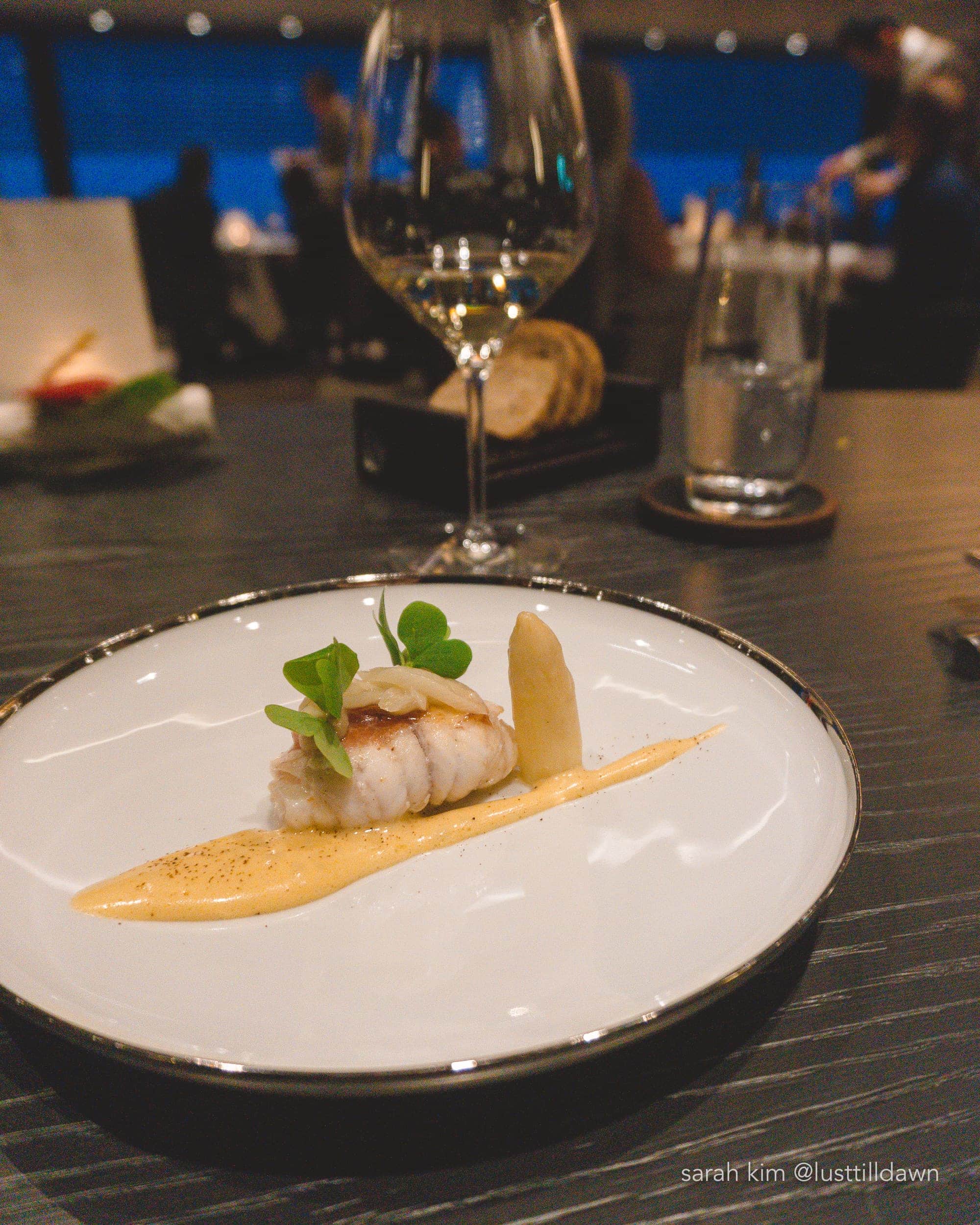 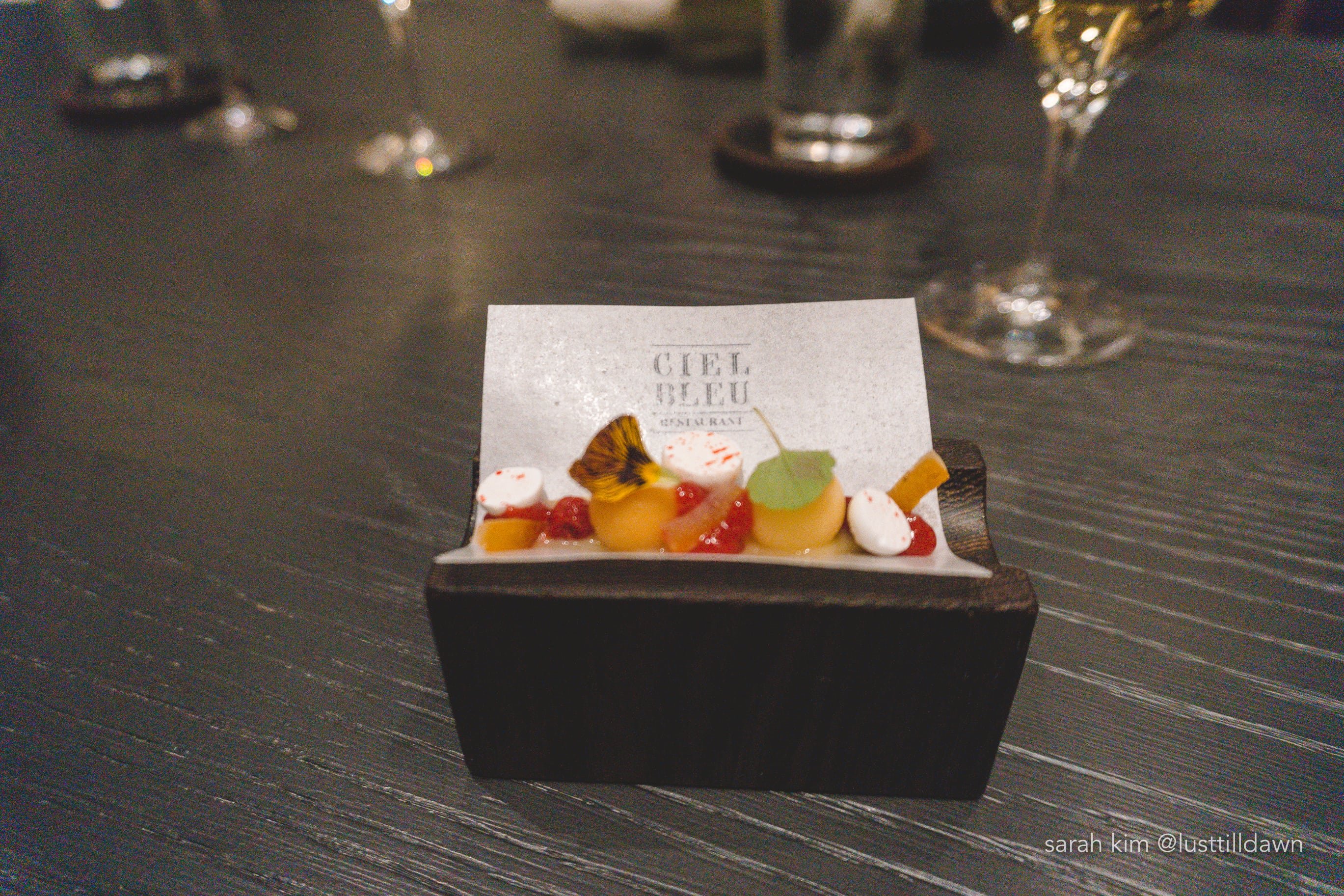 Despite being a two-star Michelin restaurant, Ciel Bleu is not pretentious whatsoever and has a playful ambiance. This pre-dessert reflected that. It was a dessert that you rolled up like a joint to highlight one of the things Amsterdam is known for.

The restaurant’s ambiance is warm and playful, and the highlight of it all is the staff. The staff works together as if they’re part of a play. They’re synchronized and so mindful of the guests and each other.  You can tell they truly enjoy working with each other and act as a team.

Our sommelier was quite entertaining as he told us about each wine. He said he wanted to bring us inside our glass and around the world, which he did. We especially loved it when he folded his fingers into his palm and rubbed his hand gently alongside his jaw as he explained what flavors we’d be tasting. 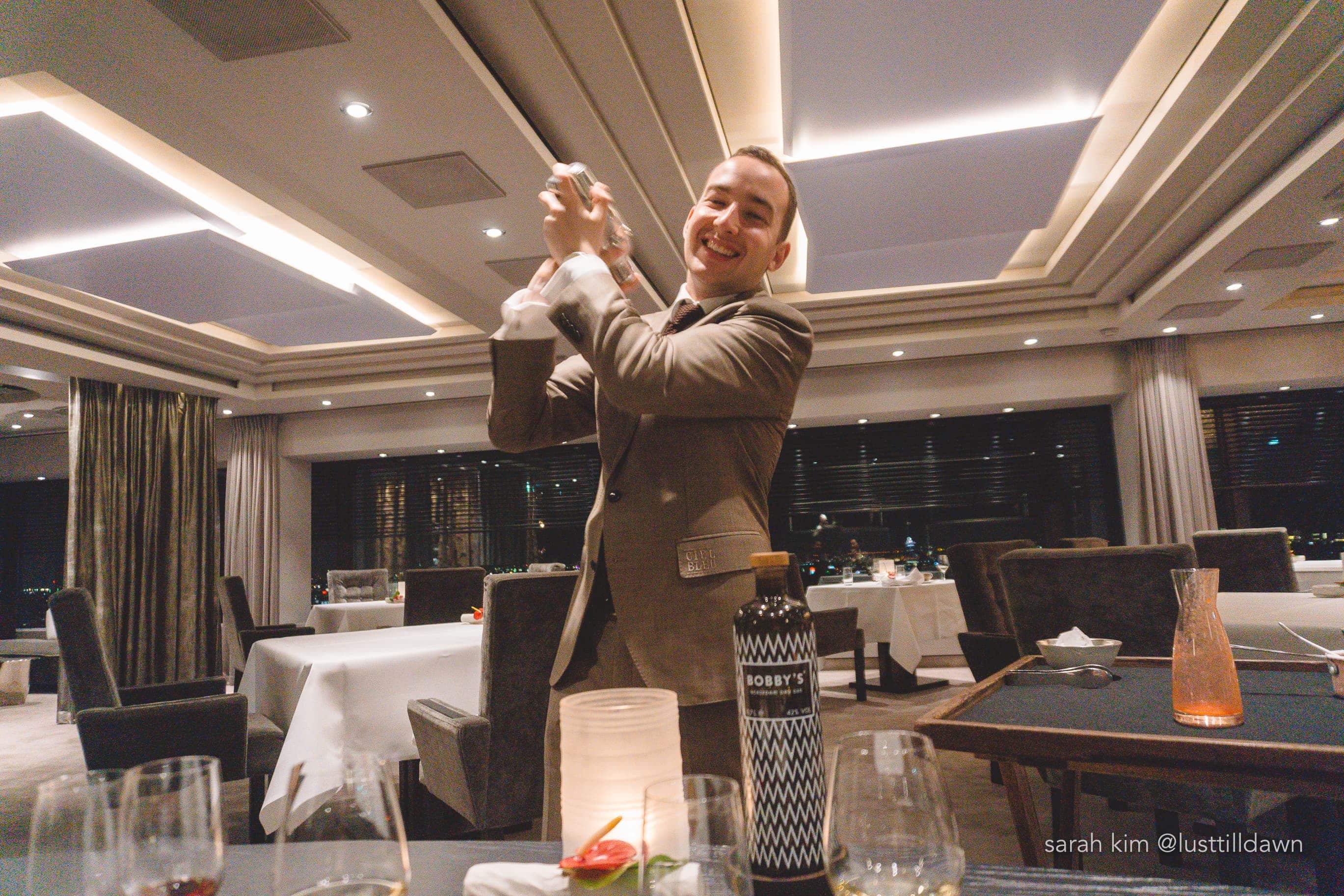 We also chatted with one of the servers who started out as a server at Ciel Bleu but then became a manager of another department at the hotel. He decided to give up his managerial position to go back to the Ciel Bleu team because he enjoyed it so much. You can really feel the servers’ enjoyment in their work, which is really nice to be around.

Lastly, Mike and I got to sit at the table with the couch side-by-side. We like to sit side-by-side at some restaurants to have a different experience, and for our three year anniversary, it was especially nice to get cozy next to each other while looking at the sunset over Amsterdam.

The only iffy part about their service was that they gave us the bill at the end instead of us asking for it, BUT TO BE FAIR, we were there until 1AM and the last ones there. It was for sure time for everyone to go home and more than understanding to hand us the bill.

We just noted it because in Amsterdam, you have to ask for the bill or they’ll never kick you out for the next guests.

How Much Our Dinner Cost

Are you eating something while you read this? Because you may want to chew and swallow before reading this because… we spent €690 ($825 USD) on a meal with drinks for two.

The rest of the bill we spent on tea and tip, which when it comes to tip, we are generally confused on what to leave because (1) you don’t normally leave tip at Michelin restaurants in Europe and (2) you don’t normally leave that much tip in restaurants in general in Amsterdam but (3) a server I hung out with from Sazanka, one Michelin star restaurant at Hotel Okura, said that people generally round up the bill for her leaving minimum 30 euro tips… so who knows. Hopefully we left enough tip for these guys!

Was eating at Ciel Bleu, a two star Michelin restaurant in Amsterdam, worth it?

Of course, it was worth it for a one-time experience, but I don’t see myself going back. It’s not because of the price, but I’m not really a fan of Dutch flavors, which a lot of the dishes had a hint of (duh– because we’re in the Netherlands).

The food was delicious, but the highlight of the restaurant was the service of the staff. They were really so nice to be around all night, and it was a true joy to see their synchronized, playful teamwork. For the experience, this restaurant was definitely worth it.

If you want to go to a Michelin restaurant in Amsterdam, but don’t want to spend as much, I’d recommend Sazanka or Yamazato, both in Hotel Okura. Sazanka is a teppanyaki restaurant while Yamazato has traditional Japanese fare like sushi and katsu.

101shares
Lust ‘Till Dawn is a participant in the Amazon Services LLC Associates Program. As an Amazon Associate, we earn from qualifying purchases. Learn more.

Privacy Policy
Corinthia Hotel Lisbon, a Luxury Hotel in Lisbon Worth Staying At
My Cozy and Comfortable Experience at an Airbnb in Lisbon