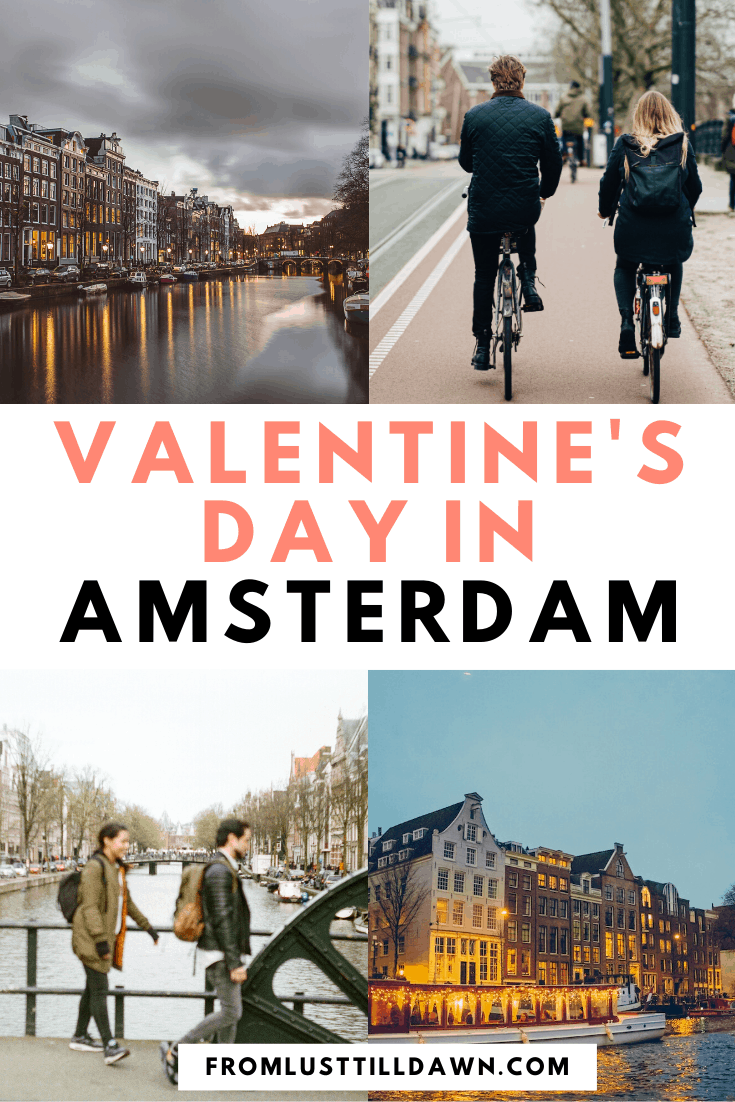 From a local, here’s are my best ideas for Valentine’s Day in Amsterdam.

Valentine’s Day in Amsterdam is a really great excuse to go out and have a romantic evening with your significant other! There’s no shortage of romantic things to do in Amsterdam but if you’re looking for some new amorous ideas, here’s a few couples’ activities that Mike and I love to do together.

In This Post: hide
I Laugh Out Loud at a Comedy Show in Amsterdam
II Stroll Quietly Around Jordaan for Valentine’s Day in Amsterdam
III Take a Sunset Boat Ride in the Canals
IV Be Adventurous and See Amsterdam from Above

Laugh Out Loud at a Comedy Show in Amsterdam

There’s nothing more fun than thinking outside the box for Valentine’s in Amsterdam and doing something beyond the usual dinner out such as sharing a laugh or two together at BOOM Chicago Comedy Club in Amsterdam.

For Valentine’s Day, this hilarious comedy club has a special Valentine’s show and a fun Valentine’s quiz to test your your partner-in-crime.

You can even pair the comedy show with a dinner and have a full night at the comedy club, which includes a four-course menu (vegan/vegetarian option included).

Book BOOM Chicago’s special Valentine’s Day show for your romantic night in Amsterdam. FYI! They got 4.3 stars on Google from 921 reviews.

Stroll Quietly Around Jordaan for Valentine’s Day in Amsterdam

Jordaan by far is the most romantic neighborhood in Amsterdam at night time. By this time, all the tourists have left this picturesque and the residents have gone home to have dinner with their families.

All that’s left are the charming street lights creating a soft glow on the street and reflecting off the still waters of the canals, making this neighborhood a romantic one to stroll through hand in hand.

Once you’ve had a good stroll throughout the small alleyways, you could stop for a drink or tea at traditional Dutch bar, Cafe t’Smalle, the best apple pie at Winkel 43 or if you fancy a whiskey, relax at the old-world charm Bar Oldenhof.

Take a Sunset Boat Ride in the Canals

Words can’t describe how beautiful the canals are during sunset time. The colors glowing in the background against the 17th century homes are a sight to see.

Valentine’s Day in Amsterdam is a great time and place to splurge on a special boat ride such as this private boat ride with Champagne. It’ll make your time in Amsterdam an extra romantic one!

Note: To be real with you, Amsterdam is quite cloudy and rainy at times so sunset might not look as beautiful as it does in the photos here. Don’t fret though. After sunset is nightfall, which is absolutely beautiful with the street lamps and home lights making the city glow!

Be Adventurous and See Amsterdam from Above

The A’dam Tower is the tallest building in Amsterdam at 20 stories high. Up above on the rooftop, you can be adventurous with your significant other and swing over the building side-by-side.

After this thrill rush, you can take in the views on their 360º Sky Deck and even have a bite and drink at their at the Sky Bar and Restaurant.

Budget Tip: If swinging over the building isn’t your cup of tea and you don’t want to pay the entrance fee, then you can wait until 9PM when the Madam Amsterdam restaurant opens up to the public as a bar. You’ll get a great view of the city from here too.

Out of all the activities above, which one entices you the most for your romantic Valentine’s Day in Amsterdam?

If you have any questions about what to do for a couple’s activity here, don’t hesitate to ask me at all. The fastest way to reach me is to DM me on Instagram @sarchetrit.