There are countless of articles on the web that says “Berlin is one of the top 10 biking cities in the world” or that “biking in Berlin is the best!” But what is biking in Berlin like for a tourist, especially someone who’s never been to Berlin before and not used to biking there?

Well, no suspense here, it’s easy! Read on to find out where to rent bikes from, general tips on biking in Berlin, and most importantly, where to go!

Renting a Bike in Berlin

There are rental bike stores everywhere in Berlin, but renting a bike that is properly maintained and in a central location is important for a smooth trip. You don’t want to have brake or gear troubles or have to go far from your tourist attractions or hotel to get a bike.

That’s why I went with Fat Tire Bike Rental in the Alexanderplatz TV Tower. It’s in a convenient location, you can keep the bike for hours or days and bike right to where you need to go (vs. Berlin’s public bike rental), the bikes are well-maintained, and they have different types of bike rentals such as city bikes, e-bikes, trekking bikes, and kid’s bikes, trailers, seats, etc.

I rented their e-bike for landmarks further outside city center and then swapped out for their city bike when I wanted to keep the bike overnight so I could bike right to my Airbnb. Biking was much quicker and more convenient than taking the U-bahn, which I used occasionally.

Cost of Renting a Bike in Berlin

The city bike is €14 for the first day, €12 for the second, and €10 for the third and on. You can keep these bikes overnight where ever you are staying.

The e-bike is €25 a day and must be returned by closing each day since they need to charge it overnight.

You might be tempted to go for the cheaper public bike rental system in Berlin, but they’re not the most convenient as you need to rent them in 30 minute periods and the pick-up/drop-off locations may not be near your walking destination. Also, it is not advisable to keep these over night.

General Tips for Biking in Berlin 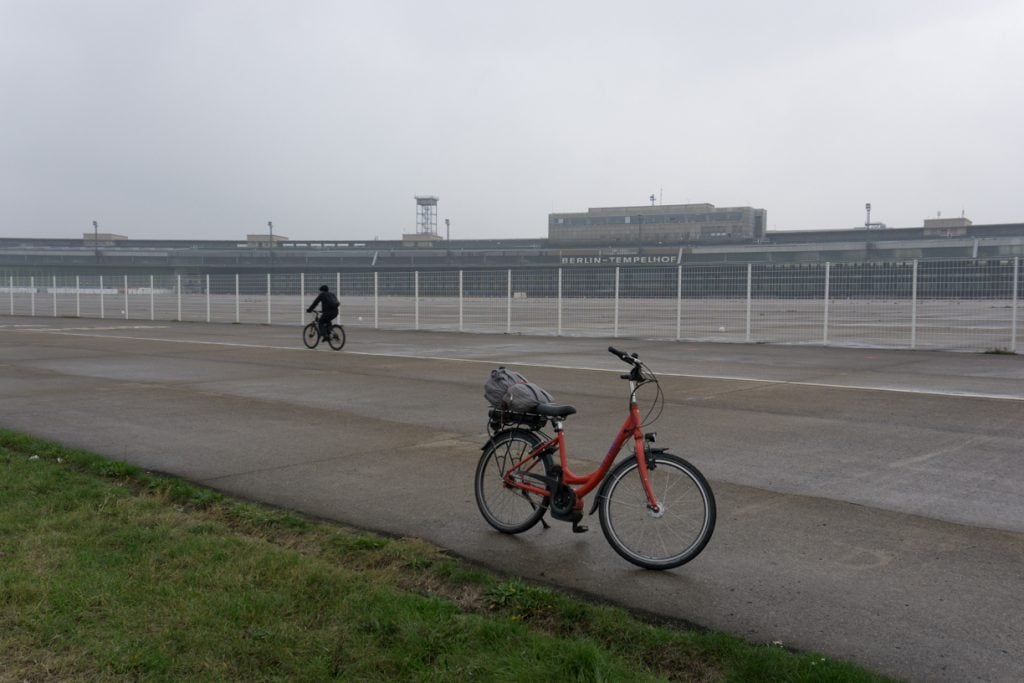 Biking in Berlin is safe and easy to do because of its bike paths. Follow these tips, and you’ll fit right in with the locals.

Where to Bike to in Berlin

Biking anywhere in Berlin is quite convenient. Biking will generally get you to your destination faster than the U-bahn and eliminates any waiting or walking time for the U-bahn or a taxi because the bike will be right next to wherever you are going. Here are some places I biked to while in Berlin without the hassle of the U-bahn or cost of a taxi!

The Natur-Park Schöneberger Südgelände is an old rail yard that was converted into a nature reserve, which hosts art events. This was my favorite park to visit as there was something both romantic and haunting about how nature overtook the structures and steel made by man. It cost a well-deserved euro to get in.

The Großer Tiergarten is Berlin’s most popular urban park and is one of the largest in Germany. There’s spaces for picnics, barbecues, jogging, sports, and of course, cycling. I found biking through this park to be the best option since it is so large, and walking the whole part would take the whole day.

The Berlin Temphof was an airport until 2008, and of course, Berlin being Berlin and not wanting to leave any space to waste, it transformed this landmark into a park where residents go to bike ride, skateboard, and even fly kites.

If you’re not up for biking around on your own but still want the biking in Berlin experience, check out Fat Tire’s Bike Tours, which combine biking with landmarks or local eats. No matter how you bike, have fun!

I borrowed a bike from Fat Tire Bikes so I could write this informative post!

19shares
Lust ‘Till Dawn is a participant in the Amazon Services LLC Associates Program. As an Amazon Associate, we earn from qualifying purchases. Learn more.

Privacy Policy
How to Treat Yourself in Bangkok
H’Otello B’01, a Contemporary and Convenient Hotel in Munich for Urban Explorers