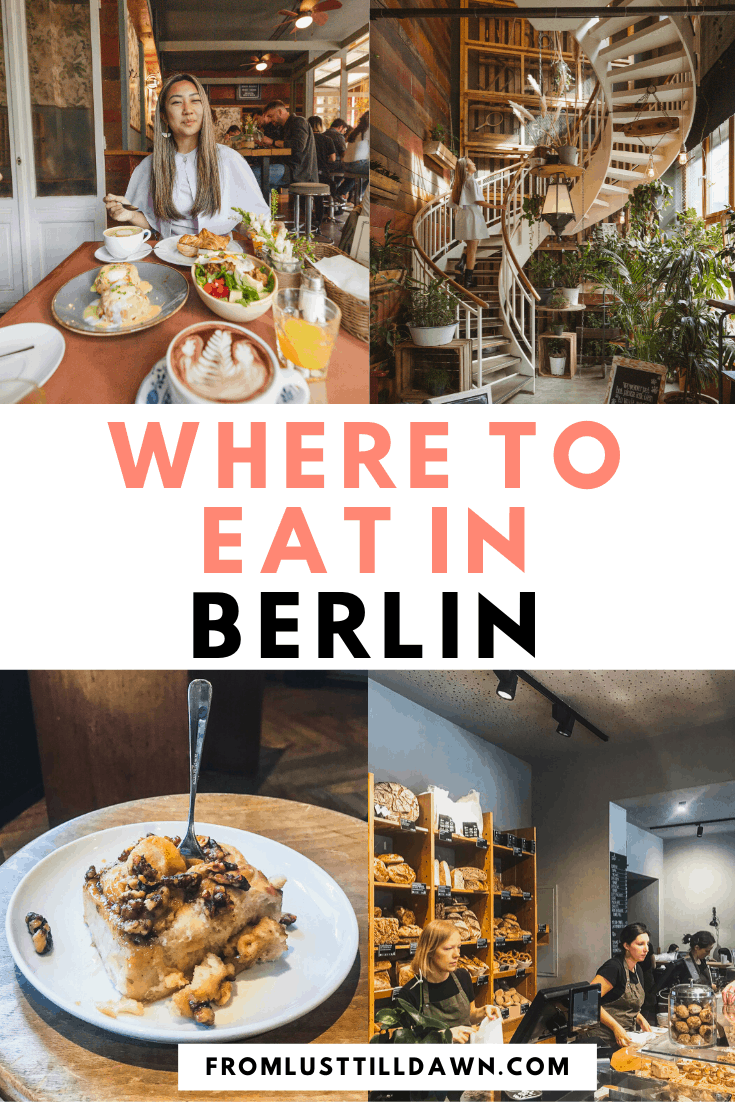 If you’re wondering where to eat in Berlin, I’ve got you covered with the best Asian food, breakfast and brunch and pizza.

Where to eat in Berlin is on my mind every single time I visit this international city of Germany. Seeking out new restaurants and revisiting old ones that I love is pretty much the reason why I go to Berlin so often.

As a result, here’s five of the best restaurants in Berlin that I love out of the many places I’ve ate at!

Where to Eat in Berlin for Asian Food

TL;DR: Get the pho as an appetizer and the crispy duck with curry as your main entree at this authentic Vietnamese restaurant.

I’ve tried a few Vietnamese restaurants in Berlin, but time and time again, every time I visit Berlin, I have an intense NEED to visit Vietnam Village. Something about being able to get the pho as an appetizer AND still have space for a main entree makes me so happy.

I mean— where in the world can you get a mini tasty pho and still have space for a main entree?

Speaking of the entree, the crispy duck with vegetables covered in a curry sauce is the way to go. The duck is tender and crispy (very similar to the duck we had in Vietnam) and the vegetables are al dente meaning they are cooked to crispy perfection.

Compared to the other Vietnamese restaurants in Berlin, I found this one to be the most authentic, which now after being to Vietnam, I can definitely stand by. It’s always on the top of my list of places to eat in Berlin even though I’ve eaten there before!

Did you know that you can save Google Maps offline and use the app without data or wifi? Here’s how in this post.

Relatively, Berlin is a cheaper city to visit in Europe, which you can tell by the price-to-quality ratio of Aiko. This sushi restaurant in Berlin offers quality sushi in an authentic Japanese setting, and the best part? The prices are extremely reasonable or if you’re from Amsterdam or NYC, they’re almost shockingly “cheap”.

The fish is fresh, the portions are more than adequate, and last but not least, the staff is super attentive (but not in an overwhelming kind of way). Definitely add Aiko to your list of places to eat in Berlin if you love sushi and a good value!

They’re fluffy and soft but a tiny bit dense from the sweetness soaking through them. They also have the lightest touch of sweet cream cheese frosting on top, and depending on which one you get, there’s even a crunch of nuts with every bite.

From locals, we’ve heard that all their breads are quite delicious here too, and there’s more to the bakery than just their cinnamon rolls.

For Instagrammers, House of Small Wonder should be on top of your ‘where to eat in Berlin’ list. Luckily for Instagrammer who are also foodies, this place is as good to eat at as it is to look at.

I highly recommend going for brunch and get their set menu, which is about €22. This menu includes four dishes and a drink.

They have this rule that everyone at your table must get the set menu, and we unfortunately went with a friend who didn’t want the menu. Since I had to try it, we ended up ordering three sets for two people, and I was so happy we did! Mike and I basically tried everything on the menu.

We loved these dishes the best:

We felt like we couldn’t skipped out on these dishes:

Pro Tip: When you enter the restaurant, everyone will be waiting downstairs for the host to come down and take your name. If the host isn’t downstairs, then don’t bother waiting for him! Walk upstairs, catch someone who works there and put your name down asap.

You’ll probably have to wait about 30 minutes before your table is ready, but they have a cute little bar on the first floor where you can grab a coffee. They’ll call your name in there!

Learn how to save Google Maps offline and use the app without data or wifi here.

Funny Story: The night before, we made a new friend at a club we were at. Surprisingly enough, we saw him work here! He thought we came because our mutual friend told us that he works here, but it was purely coincidental. I found this Instagrammable place in Berlin on Instagram and came partly for that and partly for the food.

Wow oh wow oh wow! Mike and I didn’t realize that some of the best food in Berlin would be pizza. We couldn’t stop talking about the food at ZOLA for a couple of weeks after our trip there.

We didn’t know that the crust, being basically just flour, water and salt, could be so flavorful, and the cheese that topped the Spianata pizza? Wow, we need more of that in our life please.

Besides that the pizza being amazing, ZOLA is one of the coolest restaurants in Berlin to hang out with good friends. There were lots of tables full of people in their late 20s to early 40s drinking beers and having upbeat conversations with their friends.

Great pizza, a good place to catch up with friends and a lively Italian wait staff— yes. So much yes to this place to eat in Berlin.

Funny Story: As we walked into the restaurant, we ran into a friend of ours who used to live in New York City but moved to Berlin. I had seen her twice already on my last trip and wasn’t planning on seeing her again so was quite surprised to run into her here.

She told us that she goes to ZOLA every Sunday because it’s the best pizza in Berlin! Says a lot that a New Yorker would go to the same restaurant every Sunday as her weekly pizza treat, right?

Learn how to save Google Maps offline and use the app without data or wifi here.

Well, there you have it! These are all the best restaurants in Berlin I’ve discovered after multiple trips here. I’ll be back soon just to add onto my ever-growing list of where to eat in Berlin.

Hope this post helps you find the best food in Berlin. For other tips, check out my Berlin travel guide.

Thanks for stopping by!

PIN THIS POST ON WHERE TO EAT IN BERLIN FOR LATER

Where to Eat in Berlin

Thanks for sharing this awesome ideas of the places to eat. I will be coming to Berlin next week. Vietnam village and Aiko looks good to eat.